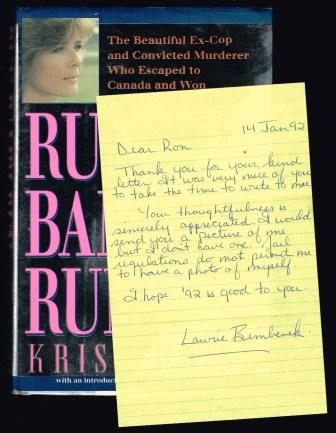 Book Condition: About 'As New'

Biography of Laurie 'Bambi' Bembenek - a Playboy Bunny, ex-cop, feminist and convicted murderer who escaped and became a fugitive in Canada. First edition of the rather common book, but, with an original handwritten letter, written in prison, from Bembenek. The letter is signed Laurie as she did not like the nickname, 'Bambi'. Plus, a newspaper clipping, a copy of a letter from 'The Friends of Lawrie [sic] Bembenek' to the Canadian Government and the staped/addressed envelope from Bembenek to her fan in British Columbia. The case interested Canadians particularly because of the pressure put on Canada from the USA Government. Scans available. Weight, 676g.

Book Condition: About 'As New'

Jacket Condition: About 'As New'