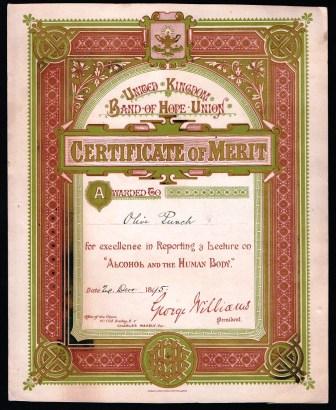 Certificate of Merit from a leading, Victorian, British Temperance Society - the Uniked Kingdon Band of Hope Union. The Band of Good Hope was one of the first Children's Temperance Societies to be formed and became one of the most well-known. It was established by Ann Jane Carlile and the Reverend Jabez Tunniclif in 1847 in Leeds, England, and by 1889 there were over two million members in the United Kingdom. The Band of Hope spread throughout the English speaking world. This Certificate awarded to Olive Punch for excellence in reporting a Lecture on 'Alcohol and the Human Body'. december, 1895. VG+, undamaged condition. Weight, 22g unpacked. Ships Lettermail.