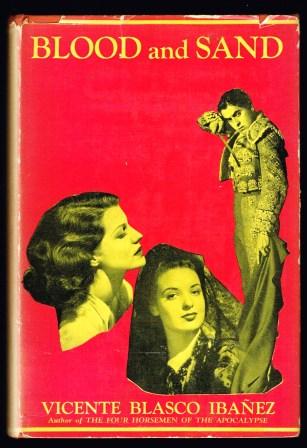 Later edition of the bullfighting novel first published in 1919. This edition was to tie-in with the 1942 release of the Motion Picture based on the book. the film starred Tyrone Power, Rita Hayworth and Linda Darnell, among others. These three star are pictures on the front on the dustjacket - the ONLY tie-in with the movie. There are No plates,or photo scenes from the movie in this edition. 356pp. interior is clean and unmarked, except for a small ink inscription under the front flap of the DJ on the fpde. Interior pages are quite 'browned' as usual. Binding is very tight and square. Orange cloth is virtually pristine. Dustjacket is generally bright and clean but with a considerably sun-faded spine and some edge wear, mostly to the top. Pics available. We ship Worldwide, use both the Canada Post and the United States Postal Service, and offer postal charges, based on actual costs, without overcharging. This item weighs 390g. Canadian domestic postal rates rise with weight, size and distance; USA rates by weight alone. World rates based on weight and destination country.